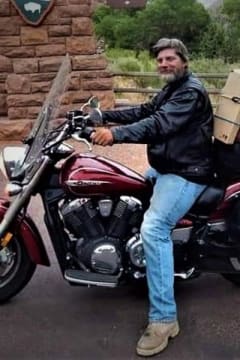 Aaron Paul Baltosser, 50, of Midway Park, passed away Friday, March 5, 2021 in a motorcycle accident. A native of Chelsea, MA, he was the loving husband to Terri Hoag Baltosser and the son of Don Baltosser and Connie Geha Nofzinger. He proudly served out country in the United States Navy where he retired as a Corpsmen. He recently obtained an Associate of Science Degree from Campbell University School of Education. Mr. Baltosser was an active member of the Newport Moose Lodge as Sgt-at-Arms as well as the North Carolina Moose Riders; he was awarded “Moose of the Year” the night just before he passed away
In addition to his wife and parents, he is survived by his son, Jon Baltosser of NY; sister, Shannon DeWulf and her husband, Mike; grandparents, Wayne and Ruthanna Nofzinger; brother in-law, Don Rogers and his wife Pauline; his Newport Moose Lodge family; and by many nieces, nephews and cousins. He was preceded in death by his son, Jacob Baltosser who died December 19, 2013 after a battle with cancer.
To know Aaron was to know the love of riding a bike, it is what he enjoyed most. He will be forever missed by all his family and friends.
A memorial service to celebrate his life will be held on Sunday, March 14, 2021 at 1:00 o’clock in the afternoon at Swansboro Moose Lodge, 161 Norris Road, Swansboro, NC 28584.
In lieu of flowers, please make memorials donations to Johnson Funeral Home: Aaron Baltosser Memorial Fund, 2685 Henderson Drive, NC 28546.