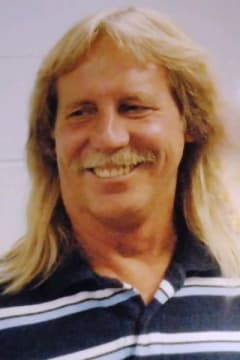 Charles William “Dewey” Dewhirst, Jr., 64, passed away December 22, 2020 at his home after a short illness. He grew up in Jacksonville, NC, he was the loving husband to Wanda Hampstead Dewhirst and the son of the late Charles Dewhirst, Sr. and Betty Balog Dewhirst. He was an employee of The Whiting-Turner Contracting Company and was of the catholic faith. Dewey loved all things water, especially surfing, fishing, tending to his pool. He also loved the outdoors, his dogs and in his spare time he was usually building something.

In addition to his wife, he is survived by his step-son Sidney Blake (Tabitha) of Anderson, SC; step-grandchildren, Tristen and Jessica; step-great-granddaughter, Blakely; sisters, Diane Dodge (Kevin) of Stafford, VA, Michelle Dewhirst of Cincinnati, OH, and Susan Deans (David) of Greenville, NC; his brother, Michael Dewhirst of Jacksonville, NC; nieces and nephews, Courtney and Kendall Dodge, Bryan and Tiffany Deans; and special friends, Allison and Fred Squires, Erica and Vic Peralta, and Steve and Annette Kennedy.
A memorial service will be held at a later date, around his birthday.
Online condolences may be made at: www.johnsonfuneralhomes.com
Arrangements are entrusted to Johnson Funeral Home, Jacksonville.

Wanda and family, may you all find peace, strength, and comfort in the days ahead. My deepest condolences for your loss. Dewey and I met in the 7th grade at Brewster Junior High School aboard Camp Lejeune. This song will always remind me of him, "Close to You" by The Carpenters. RIP Dewey
- Susan Kovacs

Dewey was a special soul not to be forgotten. He told you what he thought, had a ready laugh, was a hard worker, and had a soft heart. Wanda and family, special prayers for your heartaches, and faith that they will soon lighten. Elizabeth Derry
- Elizabeth Derry

I first meant Dewey while working on a job in Fayetteville. He was funny and always smiling. He will be greatly missed by a lot of people. May he be restored to good health, free of the pain. Amen..
- Connie Schultz