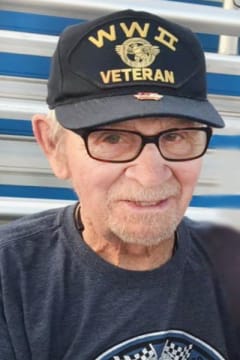 Eugene Thomas Ricker, Jr., 93, of Jacksonville, NC passed away on Sunday, January 24, 2021 at his home. Formerly of Summerville, SC and Salem, SC, he was the widow of Zeyune H. Ricker and the son of the late Eugene Ricker, Sr. and Marie Lambert Ricker. He was a Fire Chief at the Naval Weapon Station in Charleston, SC. He proudly served our country in the United States Navy as an USN Seabee, having war time in WWII. In his spare time, he enjoyed boating on his pontoon, gardening, and antiquing for fireman memorabilia. Eugene never missed a Clemson Tigers football game; but to know Eugene is to know love and how much his adored his family, even babysitting the great-grandkids on into his 80’s.
Left to cherish his memory is his daughter, Julie Robertson of Jacksonville; grandchildren, Steven James, Brice and Hal Ricker all of Summerville, SC, Jon Ricker of Durham, Heather Wilson, Brittany Thiel, and Wayne Hedden all of Jacksonville and Joshua Hedden of MS; great-grandchildren, B.J. and Hudson Ricker of Summerville, SC, Julian, Kai and Prestan Thiel all of Jacksonville, and Landon, Calianna and Ella Hedden all of MS.
A memorial service with military honors will be held in late February and will be announced by the family.
Eugene, Daddy, Poppa will be forever missed by all that loved and knew him.
Online condolences may be made at: www.johnsonfuneralhomes.com
Arrangements are entrusted to Johnson Funeral Home of Jacksonville.