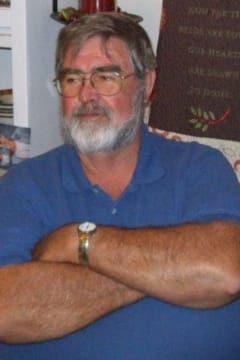 George Donald Pierce, 77, of Richlands, former Chief of the Nine Mile Volunteer Fire Department, died Tuesday at Onslow Memorial Hospital. He was the beloved husband of Barbara Batchelor Pierce, his wife of 55 years.
He was born in Onslow County, January 25, 1944, a son of the late George Washington Pierce and the late Macie Davis Pierce and had worked as a printer for the government. He was a charter member of the Nine Mile Volunteer Fire Department serving from 1974 until the time of his death and had served as Chief of the department for 25 years from January 1988 to December 1997, and from January 2000 to December 2016. He was a member of the Bethany Baptist Church.
Besides his wife Barbara, he is survived by his sons, Kevin Pierce and his wife Cindi and Kurt Pierce and his wife Melissa, all of Richlands; his brothers, Craig Pierce and his wife Sandra of New Bern and Byron Pierce and his wife Brenda of Richlands; his grandchildren Stevie, Halie, Makenzie, Kody and Katey; and great-grandchildren Aubree, Brynlee and Bennett, his sister-in-law Liz Pierce (JD's wife), and several nieces, nephews and many friends. Besides his parents, he was preceded in death and his brother J.D. Pierce
Visitation will be held Friday from 6 to 9 p.m. in the Bethany Baptist Church, 1077 Nine Mile Road in Richlands. Funeral services will be Saturday at 11 a.m. in the church with burial to follow in the Davis Family Cemetery.
Arrangements are under the direction of the Johnson Funeral Home 2685 Henderson Drive in Jacksonville. Share condolences to the family at www.johnsonfuneralhomes.com