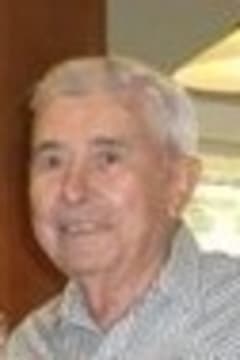 John Charles Krish, formerly of Southport NC, died Monday, October 12th in Ithaca, New York. Born on August 28, 1925, in a remote lumber camp near Demopolis, Alabama, he was the son of Joseph Krish and Juliana Knaus, both recent immigrants from Slovenia. John was married to Pauline Elizabeth Buck in North Easton, Massachusetts, on April 18, 1953. She preceded him in death as did his brothers, Joseph, Frank, and Edward, and his daughter, Gretchen Randall. He is survived by his children, Jennifer [Dan] Moore, Michael [Renata] Krish, and Andrew [Karen Macrine] Krish, and by 11 grandchildren and 5 great grandchildren, as well as numerous nieces, nephews, and cousins.

John spent his early years in Alabama until the great depression and discrimination towards immigrants forced his family to build a life in Woodlawn NY where he eventually attended St Barnabas Catholic School and Dewitt Clinton High School. Entering the Navy during WWII as a Seabee, John was stationed in the Pacific theater, including assignments in the Aleutians and Okinawa. After WWII he served again in The Korean Conflict where he was stationed in Manilla. Upon his return to NY, John began a 35 year career with the NY Telephone Company. There he met the love of his life, “Polly”. They began married life together in Mount Vernon NY and as their family grew, they lived in Hartsdale and Red Hook [in Dutchess County], NY. After retiring in 1985, John and Pauline enjoyed many years of travel before settling in Christiansburg, VA for a while. Wanting to be closer to family, John and Pauline built their dream home in Southport NC where they lived for over 20 years.

Those who knew John knew how important family was to him. He was a devoted and loving husband, father, grandfather and uncle. He valued his family connections and stayed in touch with relatives from around the country and from Slovenia. The only thing that came close to the pride he had for his family was the honor of his service as a Sea Bee. As man of faith, he was active in his church. John kept busy with many carpentry and handyman projects at his home and at the homes of his children. While living in Red Hook he also enjoyed some hobby farming and was involved in 4H projects with several of his children. Because of Covid, there will be no visitation. A private funeral mass is scheduled for 11 o’clock on Thursday, November 12, 2020 at the Infant of Prague Catholic Church and is scheduled to be livestreamed on Johnson Funeral Home’s Facebook page [ https://www.facebook.com/JohnsonFuneralHomes ]
Burial service with Military honors is to follow at noon at Coastal Carolina State Veteran’s Cemetery in Jacksonville, NC. The extended family will gather for memorial celebration at a later date.