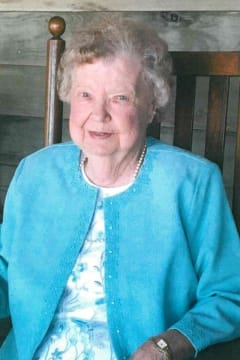 Madge Basden Huffman, 92, went to her heavenly home on September 13th, 2021. She passed peacefully at Lower Cape Fear LifeCare in Wilmington, North Carolina.
Madge, daughter of the late Roland Basden Sr. and Katie Pollard Basden, was born May 28th, 1929 in Richlands, NC. She was predeceased by her parents as well as her husband, Linster, daughter, Susan Gordon, brothers Bruce Basden and Winfred Basden, and sisters Catherine Barbee and Grace Ostrand. Madge is survived by her daughter Kaye (Randy) Harris, and son Doug (Pam) Huffman as well as four grandchildren, three great-grandchildren, and another great-grandson to be welcomed in November.
Madge was an active member of the First Christian Church Richlands. She was baptized October 1943. She was a Sunday school and VBS teacher and held various positions in the CWF. Madge also was a member of the condolence committee (20 years) and sang in the choir. She graduated from Richlands High School in 1947 and was employed with Sears and Roebuck prior to working in the operations center for Bank of North Carolina. Her greatest joys and accomplishments were being a wife and homemaker. Madge touched countless people with her kindness and joy. She was a wonderful cook, and according to her food healed and fixed everything.
There will be a celebration of life held on Monday September 20th at 1pm at First Christian Church, 124Trott Road in Richlands to be followed by a graveside burial at Onslow Memorial Park.
Arrangements are under the direction of Johnson Funeral Home, 210 West Hargett St., Richlands. Condolences may be left at by clicking the "Condolence" tab above.