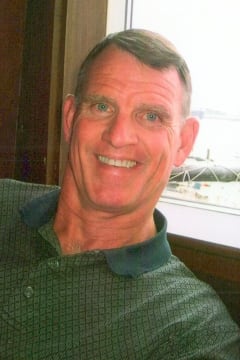 Lt Col Richard James (Dick) Gallagher USMC (Ret)
It is with heavy hearts that we share the news that Dick has passed away. He was welcomed into Eternity by his Lord and Savior Jesus Christ on Friday afternoon 3 September 2021. He died peacefully holding the hand of his beloved wife Jean. Based upon the life Dick lived here on earth, we are confident that Jesus met him with the words, "Well done my good and faithful servant."
Dick was born on February 1, 1945 in Portland, Maine. A champion high school swimming career opened the door for an athletic scholarship at Ohio's Kent State. While at Kent State, Dick discovered a love for teaching, and upon graduation, he followed his passion for swimming and teaching first to Davie Junior High in Kent, Ohio, and then onto Ohio's Cuyahoga Falls High School. Soon after settling in at Cuyahoga Falls as their swim coach, he received notice that "Uncle Sam" wanted him, and in 1971, one week before his 26th birthday, Dick received induction orders to report for two years active duty with the US Army. Those induction orders instructed Dick to report for duty eight days prior to the Ohio's High School State Championship swim meet. True to Dick's character, rather than abandon his team at such a critical time and after all the hard work his students put worth to earn such an opportunity, he enlisted in the Marines for a longer tour of duty to delay his induction until June 14th. That decision changed the course of his life forever.
Dick went onto make an outstanding career for himself as a CH-46 pilot, and in the process the Marine Corps discovered his passion and skills for not only teaching, but for leadership as well. Dick served as a Marine Corps officer for 20 years, retiring with the rank of Lieutenant Colonel. During those 20 years, he earned the respect and admiration of not only his many commanding officers, but also the men and women who had the honor of serving under his command.
Upon retiring from the Marine Corps, Dick resumed the teaching career he put on hold to serve our nation and to help keep us free and secure. He went onto spend another 15 years teaching Psychology, physical education, drivers’ education, as well as health and history classes first at Southwest High School then Bell Fork Elementary and then to Southwest Elementary. As with the Marine Corps, Dick earned the respect and honor of his supervisors, his teaching colleagues, and most importantly his students whose lives he touched and shaped.
Dick is survived by his dear wife Jean, the love of his life, their two sons Jamie Parker (wife) Shannon and Terry Slater (wife) Karol, grandchildren Laila and Robin Slater, step grandchildren Jacob and Natalie Locklear. Sister Jeannette Dyer, Sister- in-law Nancy Gallagher, several nieces, nephews and in-laws. Beloved friends Robert and Jackie Dillingham, Dr. Warren and Gloria Gabaree and Beloved fur babies Thomas, Sasha and Abby and he will be forever missed by the legion of friends who enjoyed his warm smile, cheerful spirit, and his kind and always gentleman-like demeanor.
Predeceased by his parents Joseph and Frances Gallagher, brother Frank Gallagher, brother-in-law Merle Dyer, grandson Maddox Parker. Dick has left his family and friends with memories that they will carry in their hearts forever.

Celebration of Life will be held at Johnson Funeral Home Friday, September 10,2021 at 10:30 am. Inurnment will be held at Coastal Carolina State Veterans Cemetery following the service.